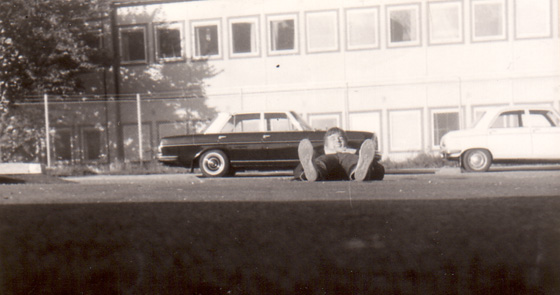 - Typical 1960's photo. Classy Mercedes in the background, painted in two colors with white wheel sides. To the right a Peugeot. The house in the back was back then used as offices while to the left in the picture one finds what used to be “Sveriges Radio“ (Radio of Sweden). Today all of it has been torn down to give place to new apartment buildings. 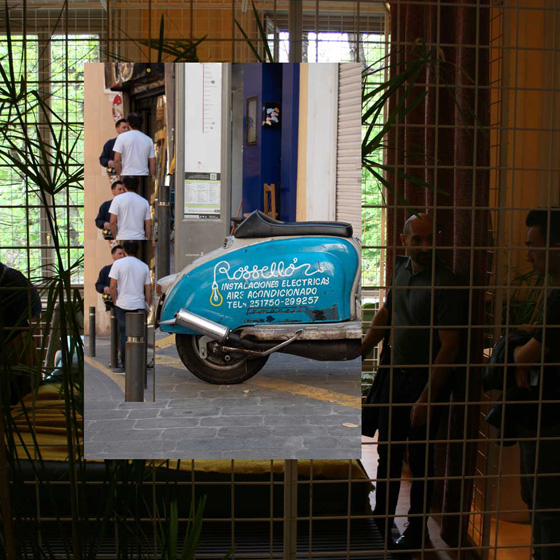 Picture taken 1975, while driving back to Stockholm. 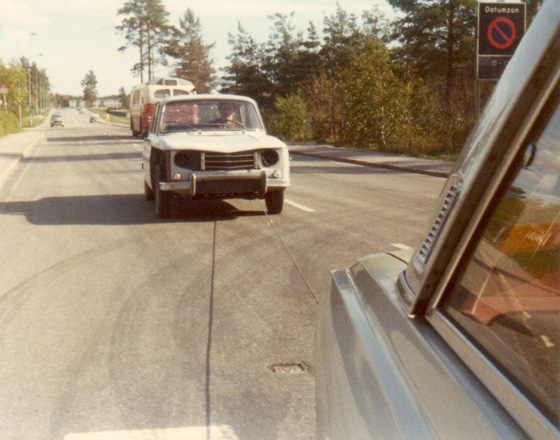 - The car towed is a Renault R8 Major and the car pulling it is a Ford Taunus 17M 1966. This picture was snapped in one of the southern suburbs of Stockholm during the summer of 1975. The Renault looks like it might need more than some TLC but it wasnt the car this driver was interested in, he was instead looking to salvage the drive train that he intended to use for the renovations of a Renault CV4.

Photo taken in Stockholm 1981 on Brahegatan. 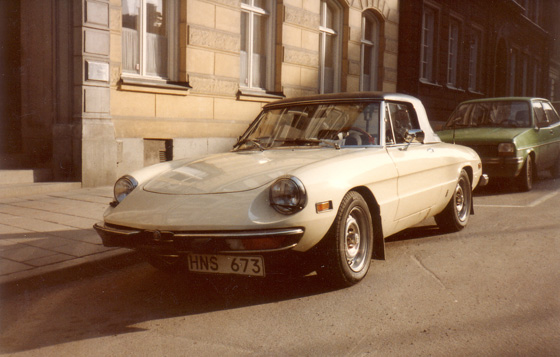 - Alfa Romeo Spider 1975, at the time equipped with fiberglass hardtop and black vinyl. The car is in its original condition except from lower wheels on broader Borrani, steel rims and tin sheets to protect the oil trough. The Spider was bought from Harald Kronegard, former racer driver who decided to make his way into the car business.

- The Alfa Romeo Spider was released in 1966, back then with the rounded rear which by many is considered to be the most desired model. The car became an instant success and was also featured in the movie The Graduate where Dustin Hoffman drove the Alfa Spider. 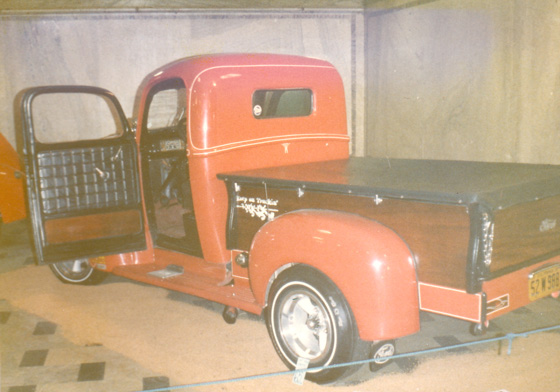 Photo taken 1970, when parked on the side of Valhallavägen and Jungfrugatan in Stockholm. 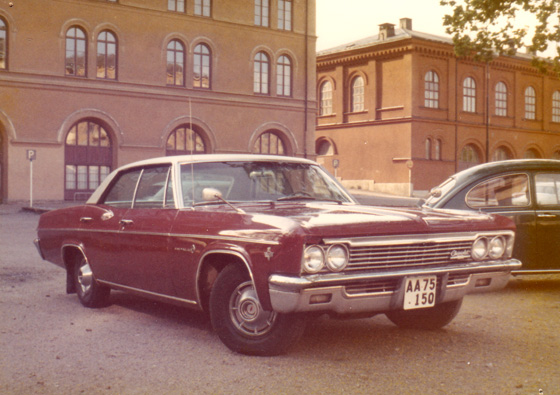 - Chevrolet Impala 1966 with vinyl dressed roof and light trim. This particular car was bought from car seller Arne Nordqvist from Södermalm in Stockholm who was known to be the go-to guy when buying an American car. In the background a VW 1500 from 1968.

Photo taken 1970 at a parking lot at Valhallavägen and Jungfrugatan in Stockholm. 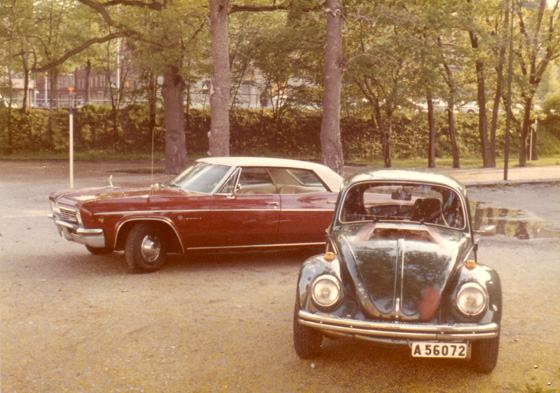 - This Beetle is equipped with an additional Monza GT chair and a leather steering wheel from Peco, direction indicators has even been turned into orange position lights. Positioned on the hood there is an additional air intake that later on was removed. The number plate is moved over to the left. 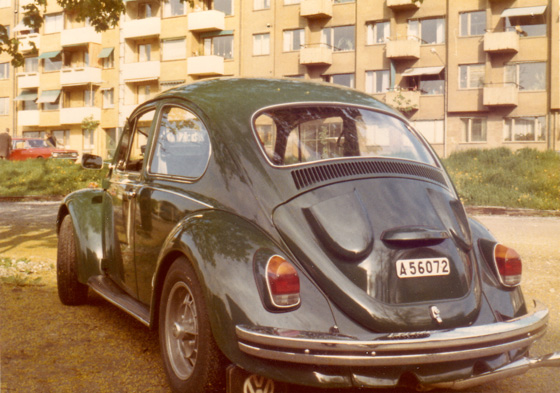 - 5.5 aluminum rims from JP and snake (muffler) from the American company Brute. Two additional air-intakes are placed on the hood for enhanced cooling. Also to notice is the size of the number plate which here has been changed to give place for a smaller one. In the background one can see two people entering an Opel Record. This car was later on put through major restorations while given some additional features and was displayed at various car shows in Sweden.

Photo taken 1977 in a garage in Stockholm. 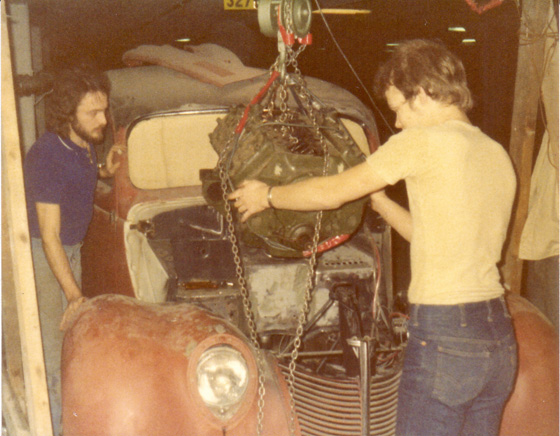 - 1977, four friends changing a motor in a large garage at Gardet in Stockholm. This flathead V8 engine was bought from a Nato storage room and is here being assembled in a 1939 Ford. The engine has 100 hp which is quite the step-up from the old 60 hp motor. 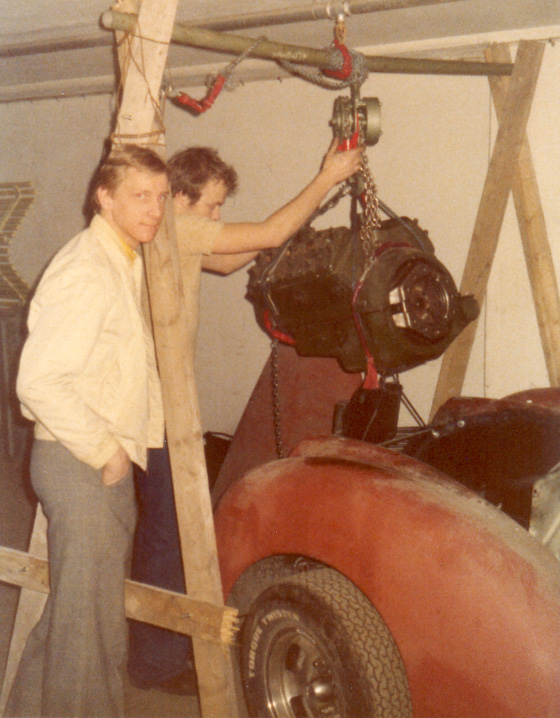 - This is how it was done back in the 70's. Improvisation was the way to go when equipment was lacking, hence the wooden construction and iron pipes to lift up the motor. Far away from ASTM standards and what not but it all worked out well. Managing this project was Ulf Stenberg and behind the camera Klas Sjöberg. 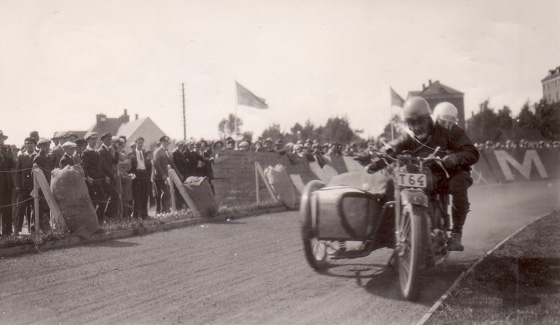 - Anyone who can give any additional information about this picture? Also, notice the properly dressed audience in the background. 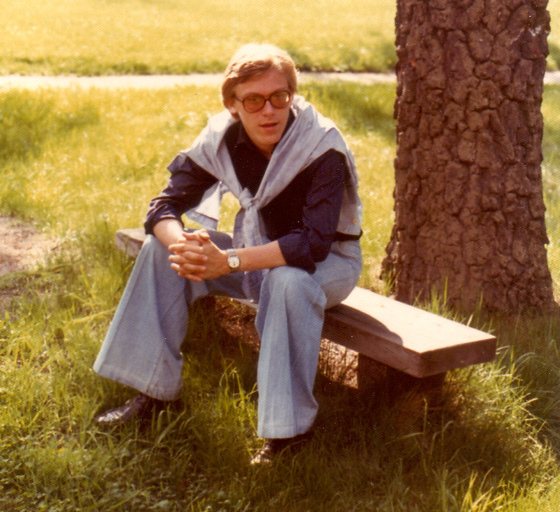 - Stylish at the time, flared Gul & Blå jeans with just polished Moreschi shoes and huge glasses. This picture was taken during the summer of 1973 during a break from the Hot Rod photo shoot.

Vallhallavägen 129,131 in Stockholm. Photo taken before September 3, 1967 when Sweden changed to right-hand traffic.

- Wintertime, cold, and the sun is barely making it over the treetops. The smart traveler would pay a visit to the popular coffee place Eko (seen on right side of picture). Driving on the road is what used to be the most popular car in Sweden, a Volvo Amazon. Also driving on the road is a Fiat.

- Ford Anglia 1948. Three geared Mustang 289 with a V8 motor. Original frame has been reinforced to be able to sustain the increased weight. Discbrakes has been put in behind the front wheels and MT rims are used. The inside of the body has been clothed with black Velvetex and the four GT chairs are dressed in black fake leather, Motolito steering wheel Jaeger instruments compliment the fittings. Trush sound mufflers have been installed under the car by the builder Göran Boström and the owner of this sweet ride is Lars Mohlin from Mora.

Additional HP for the Beetle

- VW 1500 1967, this was how it was supposed to look under the hood in the 70's if you were a Volkswagen owner. Sharp motor with a new camshaft, Holley carburetor, small aluminum pulley, outside oil-cooler with filter and snake sound muffler. A nice white striping, sold at Comfort Racing on Sveavägen, has been added to the body. This fashion statement came in various widths and each roll was 12.8 meter long.

- This year the best spot at the Hot Rod Show was given to Staffan Runhag with his Ford 1936 Coupé. This teacher from Enköping had a good eye for re-designing cars and his work was admired by many during the 1974's car show. In the background one can make out Roger Custom's showcase. Short jackets seem to be a definite fad but what is the man to the left looking at? Might it be a sign with information about the car?

Now 135 pictures in the museum